Keep spreading the word -- write about the walk on your blog, enlist friends to join in, etc. Let's get as many people marching down Pico as possible on November 17!

I'm starting to take a count on how many people might be interested in sharing a bus back to Downtown when the walk is over. Leave your thoughts below, or email us at franklin_avenue@yahoo.com.

SAVE THE DATE: The Great Los Angeles Walk Returns! 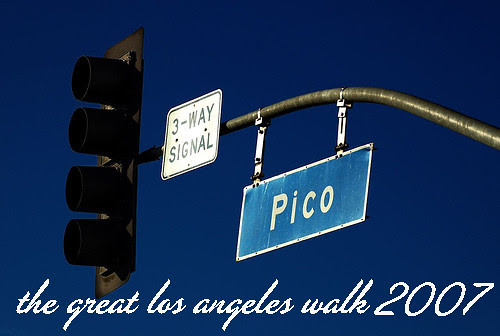 All right, now about that announcement we promised ya on Friday (and kudos to Shannon for nailing it!): Last year, we hiked Wilshire Blvd. end-to-end, 16 miles from downtown to Santa Monica. This year, we head a few blocks south and conquer Pico!

For the second year in a row, we're clearing out the Saturday before Thanksgiving -- Nov. 17 -- for the all-day hike. (Consider it license to then gourge yourself a few days later on stuffing and cranberry sauce.) Those of you who joined in the festivities last year know the drill: We'll meet up early for breakfast, and hit the road by 9. We'll stop along the way at anything that looks interesting, as well as for lunch... and make it to Santa Monica by dinnertime, where we'll celebrate.

We had a great turnout last year -- I still can't believe how many people made it end-to-end. (Above, the Walkers at the finish line in Santa Monica.) Now, I'm hoping to get an even bigger crowd on board.

Wanna take part? Simply email us at franklin_avenue@yahoo.com. Leave us your name and email address... and we'll keep you informed of details.

So why Pico? For starters, I was inspired by the famous tale of L.A.'s own Pulitzer Prize-winning food critic Jonathan Gold, who decided to eat his way down the boulevard when he was 20.

What's more, it's just a visually stimulating street. While Olympic (and even Wilshire) has long stretches of uneventful, residential areas, Pico is consistently loud and frantic.

Keep it tuned here as we talk more about the Great Los Angeles Walk 2007 in the next few days. We'll be discussing transportation (including the possibility of a bus to shuttle us back to downtown), Pico eating options (perhaps J-Gold will give us some tips) and more.