Get your 2021 GREAT LOS ANGELES WALK shirt now in order for it to arrive before this year's Walk! Wear it proudly on November 20 -- and show everyone that, yep, you spent all day retracing the route of Los Angeles' Los Pobladores -- original settlers! Click below for the T-shirts... which this year can come in black, white or pink!

We've just posted a whole bunch of t-shirts at Spreadshirt, including choices for men, women and kids. We don't make any money on these; it's just to get everyone in the spirit. Go here: greatlawalk.spreadshirt.com (or click below).

Meanwhile, keep up with info about this year's GREAT LOS ANGELES WALK via our website (www.greatlawalk.com) or our Facebook page (www.facebook.com/greatlawalk). And RSVP at our email (greatlawalk@mail.com)!


greatlawalk
Posted by Michael Schneider at 4:49 PM No comments:

Want to make sure you're in the loop when it comes to the annual Great Los Angeles Walk? Sign up for our email list. (If you've signed up in the past, chances are you're already on this list.) We promise we won't spam your inbox, but will email a few times a year with GLAW details. Sign up below:

Posted by Michael Schneider at 8:45 AM No comments: 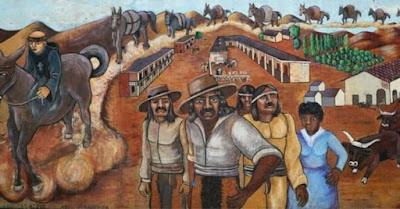 Every year, hundreds of Angelenos walk the historic route, from the San Gabriel Mission to El Pueblo Historical Monument, considered the birthplace of Los Angeles, to celebrate our city's birthday. This year, the Great Los Angeles Walk will do the same.

But the Porbladores route is only nine miles — which is a little more than half our usual downtown-to-ocean journey. So once we get to El Pueblo, we'll also walk through downtown Los Angeles' Spring St., Broadway and Grand Ave., in order to spend a bit more time exploring our fine city.

All told, this year's route will still be the shortest ever in the Great Los Angeles Walk's 16-year history: Just 14 miles. But that's because we think this year everyone will really want to stop and explore both the Pueblo (including Olvera Street) and downtown. Stop inside the Last Bookstore. See how many of the historic movie palaces you can walk in and look at on Broadway. And of course, end our journey by taking Angel's Flight railway down to Grand Central Market for a celebratory meal and drink.

The walk to El Pueblo approximately three hours to complete, which is the perfect time for a lunch break at either Olvera Street or nearby in Chinatown (or, of course, Philippe The Original!)

After that, take another few hours to walk down Spring St. to Olympic, back up Broadway to Grand Park, then up to Disney Hall and Grand Ave., followed by Angel's Flight back down to Grand Central Market.

What a perfect way to explore the original history of Los Angeles. Bring your masks, make sure you're vaccinated, practice social distance and good hygiene, and join us on Saturday, November 20 — the Saturday before Thanksgiving, as always — at 9 am; we'll be in the Plaza Park in front of the Mission San Gabriel Arcángel, 428 S Mission Dr, San Gabriel, CA.

Here's the first part of the Walk, the official Pobladores route as illustrated by the city of San Gabriel (click to make bigger; we'll have our own maps ready for you before the walk): 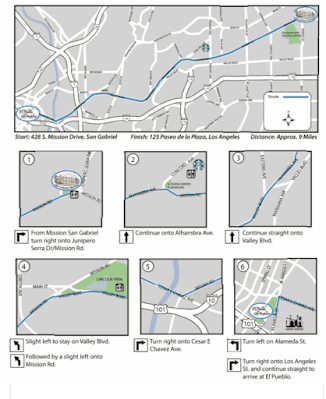 Posted by Michael Schneider at 1:37 PM No comments: