Thanks to Fred Camino, who has put together an extensive post on how to take Metro buses to and from this year's event.

My advice: Either plan with a friend and get to Venice Beach around 8 a.m., parking one car, then carpooling to USC (where you'll park the other car).

OR: Park at USC, walk to Venice, then eventually take Metro back to USC.

OR: Park at Venice Beach at 7 a.m., allowing yourself enough time to board a Metro bus to USC. That way, your car is waiting for you when you arrive.

We've tried and failed in the past to drum up enough interest to rent a bus to transport people back to the start line. But if any of you would like to take the lead, I can publicize your plans and hopefully get enough participants for you.

Metro Trip Planner
Posted by Mike at 11:57 AM 3 comments: 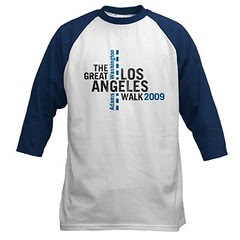 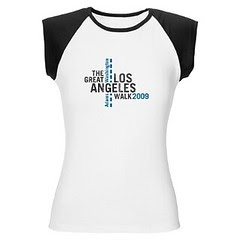 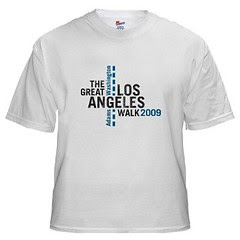 Shirts, of course, aren't necessary for the walk. But show your Great Los Angeles Walk pride! Go to www.cafepress.com/franklinavenue to order!
Posted by Mike at 10:52 AM No comments:

ONE MONTH FROM TODAY: The Great Los Angeles Walk 4

Believe it or not, we're now just a month out from the annual Great Los Angeles Walk -- our annual urban hike from downtown Los Angeles to the ocean. The walk takes place on SATURDAY, NOV. 21, 2009 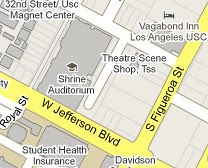 MEET AT 9 A.M. ON THE SIDE OF THE SHRINE AUDITORIUM -- on JEFFERSON, ACROSS THE STREET FROM USC PARKING LOT D (where you can park all day for just $8).

This year, we're heading south -- and once again diving into the history of Los Angeles. This year, we hit the ex-presidents: Washington and Adams.

The route will take us past some of L.A.'s most beautiful historic places -- such as the Automobile Club of Southern California headquarters, the Golden State Mutual Life headquarters, St. Vincent de Paul Catholic Roman Catholic church and much more. There's even Ray Charles' old recording studio.

And then there's the collection of historic homes. Wikipedia writes:

The West Adams area was developed between 1880 and 1925, and contains many diverse architectural styles of the era. Architectural styles seen in West Adams include the Queen Anne, Shingle, Gothic Revival, Transitional Arts and Crafts, American Craftsman/Ultimate Bungalow, Craftsman Bungalow, Colonial Revival, Renaissance Revival, Mediterranean Revival, Spanish Colonial Revival, Mission Revival, Egyptian Revival, Beaux-Arts and Neoclassical styles. West Adams boasts the only Greene and Greene house in Los Angeles. Its historic homes are frequently used as locations for movies and TV shows including CSI, Six Feet Under, The Shield, Monk, Confessions of a Dangerous Mind and Of Mice and Men.

We're working with several organizations in putting together a guide for us to walk and enjoy the architecture -- and also help figure out the best route.

We'll be walking a mix of Adams and Washington -- until we get to Culver City, where we'll have lunch and then exclusively hike the rest of Washington Blvd. all the way to Venice Beach.

As usual, we'll celebrate afterward at a location to be named later. If you'd like to host the post-walk event, or at least help organize it, please contact us at our franklin_avenue(at)yahoo(dot)com email address.

For those of you new to our annual event, it's quite simple: We walk. No agenda, no cause, no special reason -- just for love of Los Angeles. It's the Saturday before Thanksgiving, which means you can work off some pounds in preparation for the following Thursday's pigout. And this year's walk promises to be shorter than last year's longer hike -- so no complaints! (People run 26-mile marathons in a few hours all the time; you can easily walk 14 miles over the course of eight hours, with plenty of stops along the way.)

Anyone can join in... just email us at greatlawalk@mail.com.

And keep checking out the official Great Los Angeles Walk website -- GreatLAWalk.com -- for more details! We'll see you on Nov. 21.

Above, a YouTube video taken by a participant from last year's GREAT LOS ANGELES WALK -- SANTA MONICA.
Posted by Mike at 1:34 AM 3 comments: