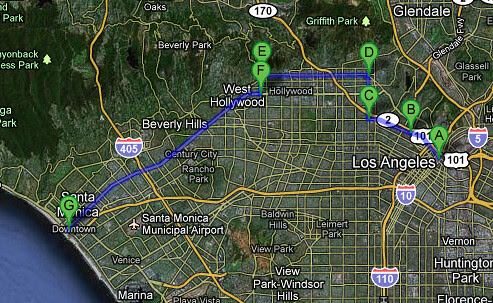 For the Great Los Angeles Walk 2011, we're going to trek through the neighborhood that symbolizes L.A.'s most famous export -- Hollywood. Think Musso & Frank's; Grauman's Egyptian and Chinese Theatres; the Walk of Fame; the Hollywood Roosevelt Hotel; Capitol Records Building; the Pantages; Hollywood and Vine; and much more.

Participants will meet downtown at the Triforium sculpture (at Fletcher Bowron Square, across from City Hall) at 9 a.m. on Saturday, Nov. 19, and proceed to walk the approximately 19-mile journey to the Pacific Ocean.

As you know by now, I launched the Great Los Angeles Walk in 2006 as a way to celebrate my tenth year in Los Angeles. That year, inspired by the book "Wilshire Boulevard: Grand Concourse of Los Angeles," we walked Wilshire. In 2007, for an encore, we hiked down Pico Boulevard. The 2008 Walk took on Santa Monica Blvd. (via Sunset). And in 2009, the event kicked off in the historic West Adams district and walked to Venice Beach via Adams and Washington. For its fifth edition in 2010, the Great Los Angeles Walk returned to Wilshire.

This year, we toyed with several routes, including Ventura Boulevard in the Valley. But I heard from many of you that the downtown-to-the-ocean tradition needed to be upheld. And I agree: There's something about making it to the Pacific around 5 p.m. that adds to a sense of accomplishment. We'll hit Ventura Boulevard one of these years... but for now, we decided that there was still plenty of ground to cover on this side of the hill -- including historic Hollywood.

Keep checking out www.greatlawalk.com for details, and make sure you're on our email list by dropping a line to greatlawalk@mail.com. More info, including T-shirts, to come. ALSO, if you're interested in sponsoring a rest stop for walkers, or if you're a restaurant in Hollywood or Santa Monica willing to house our lunch and afterparty (don't worry, everyone's paying on their own dime), let us know!