One Final Take: The Great Los Angeles Walk 2008 on YouTube

Just wanted to say thanks. This was my first time doing the walk and I really enjoyed it. It was lots of fun. I can't wait to do it next year!

I put together a video of the walk that I would like to share with you... Unfortunately the camera battery started running low around mile 4... Next year I'll be better prepared. Hope you like it.

It's pretty cool to see people give their take on how they heard about the race -- and why they're doing it.

Thanks again to everyone who participated! We'll see you next year -- as usual, the Saturday before Thanksgiving: Nov. 21, 2009.
Posted by Mike at 11:01 PM No comments:

And you thought we were all crazy! We did it, we hiked 18.3 miles from Union Station to the ocean on a beautiful Southern California Saturday.

For the third annual Great Los Angeles Walk, I chose the longest course yet. And yet we attracted the biggest crowd yet too.

Approximately 150 of us (some say more, some say less, several of us settled at the 150 estimate) gathered early in the day (some had been up super early, parking in Santa Monica and then taking the bus out east) for the event. We started at Union Station at 9 in the morning, and after a quick detour through Olvera Street, made it on to Cesar Chavez Blvd. From there, Cesar Chavez quickly turned into Sunset, and we hiked on, through Echo Park, past Dodger Stadium and on to Silver Lake.

At Sunset Junction, we peeled off onto the start of Santa Monica Blvd. We continued, onward past the Hollywood Freeway (and the former Hollywood Star Lanes site, RIP), and into Hollywood. We scored some free water from the Jackson Hewitt tax prep company, walked past Hollywood Forever cemetery, and into West Hollywood. Groups broke for lunch at several Weho spots... and many of us reconvened right at the West Hollywood/Beverly Hills border at 2 p.m.

From there, we walked the dirt sidewalk of Bev Hills (apparently they're resurfacing the bike path) and made it to the intersection of Santa Monica and Wilshire (home to the first walk in 2006!). Several of us walked into the old Trader Vic's restaurant at the Beverly Hilton, where an auction was taking place -- the famed Pickford estate. Furniture, clothes, photos... some reasonably priced (including a menu from a 1930 William Randolph Hearst dinner!). Onward, we passed by Century City and the Mormon temple... and then under the 405, and soon, as we hit Santa Monica, we began to feel the cool ocean breeze.

Santa Monica is always a snap, as the numbered streets help count down to the finish line.

Here's the crazy part: Some walkers sprinted so fast, they got to the finish by 3:15 (I worry that they didn't get a real sense of the route, having sped by so fast!) The bulk of us, including me, got to the end between 5 and 5:30 -- still faster than last year, when we walked 2.5 miles less, yet got there at the same time. (We were pacing around 20 minutes a mile -- check out my Great LA Walk Twitter feed to see.)

A handful of walkers did it right: They got to the end at around 6:30, having taken their time to explore sites along the way. Whatever the pace, most made it to the Britannia Pub after all to toast their feat. And rest their feet.

I've uploaded a ton of photos at our Flickr group site: www.flickr.com/groups/greatlawalk. If you were on the walk, feel free to add your pics to the group as well!

And please send me the web addresses to your blog posts and photo collections, we'll post all the links here, for easy access.

:: Anthony's got some great shots here.

:: Scott Lowe of Tropico Station fame has some pics here, and a post on the day here.

:: Jeremy Miles ("Beautiful Freaks") took these shots. He blogs about the adventure here.

:: Follow Raul's pics here. He also recaps the day at his blog here. Raul's crew also gets points for being most creative -- re-enacting the number for each mile marker (above, they do "8"s for mile 8 -- Martel). 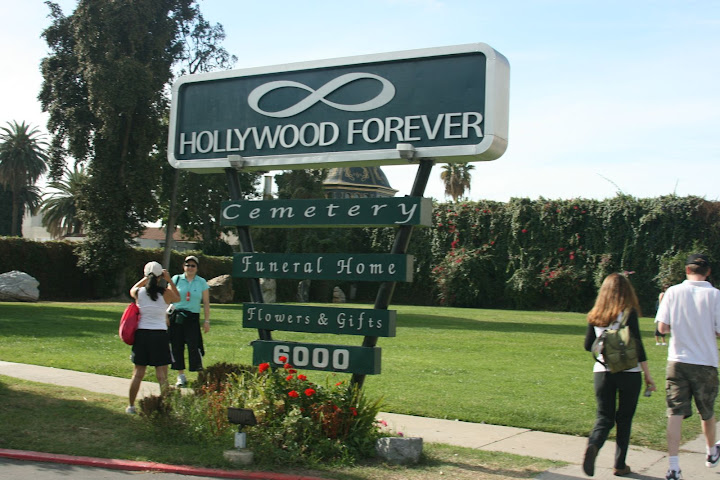 ::LA_OC_Foodie has put his pics here.

:: Caroline on Crack's pics are here, and her blog post here.

:: Scott's shots are here. These are some of Maria's faves; Scott has a good eye of details that a lot of us missed!

:: Joni, the Accidental Yogist, has her recap here.

Now, some of my shots from this year's event:

Part of the crowd gathers in the Union Station courtyard

I brief the crowd

Sounds good to me...

The friendly nun (photo by Anthony)

The Beautification Team has its work cut out for it

Will Campbell has a message for one of those LAPD spy cameras.

We were tempted, but ultimately decided a Formosa pit stop would steer us off course.

Excited to be at the Beverly Hills border

Heading back out for the afternoon portion of the walk -- only 8 miles to go!

Hey, yo, that's cheating! (Don't worry, he promises via the comments that he did, indeed, retrace his steps!)

Walking to the finish line

One of the several groups to hit the finish line