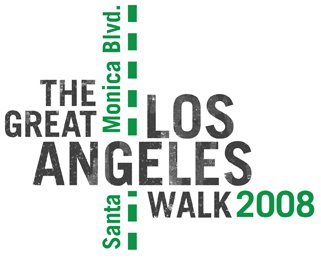 The Great Los Angeles Walk 2008 takes place tomorrow morning at 9 a.m.! For those of you walking, a reminder: You that you should make sure you have a transportation plan in place, so you're not stranded after walking all day!

I've heard from several of you, and it seems like a consensus is brewing that the best option for those of you without anyone picking you up is to PARK IN THE MORNING in Santa Monica, and take the bus all the way to Union Station BEFORE the walk. (That way, your car is waiting for you when it's all done.)

Veteran walker Joni was the first to give this tip:

For those choosing to leave their cars at the end of the walk route (or for those who live in Santa Monica like I do), the Big Blue Bus #10 is a freeway flyer that goes from Santa Monica and 4th (near the Britannia Pub, our after party location) to Downtown's Union Station.

It runs less often than the 704, but it gets there much faster:

The #10 makes a number of stops along Santa Monica Blvd before it hops on the freeway at bundy, so you don't have to drive all the way to the Promenade to catch it (and you can always catch the big blue #1 to get back to where you left your car from the after-walk party).

For those of you who nonetheless decide to park at Union Station, that Big Blue Bus #10 heads back to Union Station from 4th & Santa Monica at 5:44 pm, 6:15 pm, and 7:16 pm (the last trip of the evening), each scheduled to take about 55 minutes.

ESCAPE ROUTE: Along the route, if you're exhausted and want to take the bus either to Santa Monica or Union Station, you've got a couple of bus or rail options (thanks to David for this info):


I'll be updating mile by mile, as well as when we stop and start, take breaks, etc. at www.twitter.com/greatlawalk.

Here are a few more people who plan to Twitter:


If you plan to, let me know, so I can compile a master list.

Meanwhile, we'll see you on Saturday! The crowd will be gathering in the courtyard outside (on the right of the main hall, if you're facing the entrance) of Union Station. We'll then head through Olvera Street and make our way to Cesar Chavez... and we're off!
Posted by Mike at 12:32 AM

Argh!
I'm crushed.
I would have LOVED to have participated in this but I am just finding out about it now (Fri night) and I have to WORK this weekend !
ARGH!
Let's move it to NEXT weekend !