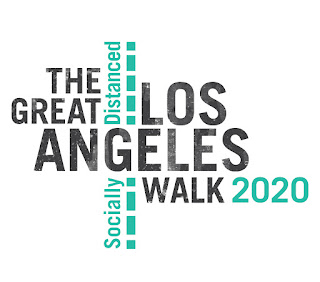 As sent to media last week:

LOS ANGELES (Nov. 10, 2020) -- Hundreds of Angelenos will hit the sidewalks once again on Saturday, November 21, for The Great Los Angeles Walk 2020 – the annual event that dispels the myth that “nobody walks in L.A.”

But in the wake of the COVID-19 pandemic, this year's walk will be a little different. This year, for the 15th edition, The Great Los Angeles Walk (http://www.greatlawalk.com)won't kick off with its usual gathering (there is no start time this year), and it also won't end with a celebration. Instead, participants are encouraged to walk at their own pace, and on their own schedule, down Wilshire Boulevard throughout the day.

Wilshire Boulevard was the route for the first Walk in 2006, and again for a second time in 2010. . Participants can start right where Wilshire begins, in downtown Los Angeles at Grand Ave., and proceed to walk the entire 15.6 mile length to the ocean.

Along the way, as they hike down L.A.’s grand boulevard, walkers will encounter historic buildings like Bullock’s Wilshire and the Wiltern Theatre; attractions such as MacArthur Park and the Los Angeles County Museum of Art; and the remains of L.A. icons that fell to the wrecking ball, such as the Ambassador Hotel and Perino’s.

Walkers will pass through a diverse cross-section of the region, including Downtown Los Angeles, Koreatown, the Miracle Mile, Beverly Hills, Westwood and Santa Monica.

Everyone will be encouraged to explore the city in a safe way, and follow proper safety protocols, such as wearing a mask and maintaining a proper distancing from others. From there, they should explore the city, document what they see and share that experience with others. We won't be able to document our start and journey as a group this year, but we will be able to chronicle it virutally.

In 2007, for an encore, he chose another downtown-to-the-ocean route: Pico Boulevard. The 2008 Walk took on Santa Monica Blvd. In 2009, the event kicked off in the historic West Adams district and walked to Venice Beach via Adams and Washington. In 2010, for its fifth edition, the Great Los Angeles Walk reprised its original Wilshire journey. In 2011, participants marched to the ocean via Hollywood Boulevard. In 2012, the Walk traveled across Melrose Avenue; in 2013, Sunset Boulevard; in 2014, the Walk traveled across the San Fernando Valley via Ventura Boulevard; in 2015, the Walk took on Olympic Boulevard; in 2016, it returned to Pico; in 2017, the Walk tackled Beverly Boulevard; in 2018, in honor of Jonathan Gold, we walked on 6th Street, including through Koreatown; and in 2019, we walked down Colorado Blvd. from Arcadia and Pasadena, and then through Highland Park to downtown via Figueroa.

Posted by Michael Schneider at 5:03 PM