Two Days Until the Walk: Eating Down Pico 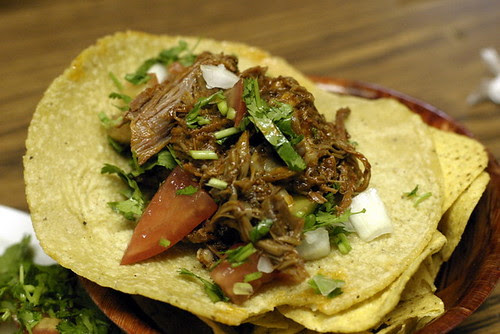 (Flickr pic of birria taco at El Parian by larryleenyc.)

Before we all embark on the Great Los Angeles Walk this Saturday, here's some required reading: Jonathan Gold's recap of he year he ate down Pico Boulevard.

Sunset may have more famous restaurants, La Brea better restaurants and Melrose more restaurants whose chairs have nestled Mira Sorvino’s gently rounded flanks. No glossy magazine has ever suggested Pico as an emerging hot street; no real estate ad has ever described a house as Pico-adjacent. The street plays host to the unglamorous bits of Los Angeles, the row of one-stops that supply records to local jukeboxes, the kosher-pizza district, the auto-body shops that speckle its length the way giant churches speckle Wilshire. And while Pico may divide neighborhoods more than it creates them — Koreatown from Harvard Heights, Wilshire Center from Midtown, Beverly Hills–adjacent from not-all-that-Beverly-Hills-adjacent, neighborhoods your cousin Martha lives in from neighborhoods she wouldn’t step into after dark — there isn’t even a Pico-identified gang.

But precisely because Pico is so unremarked, because it is left alone like old lawn furniture moldering away in the side yard of a suburban house, it is at the center of entry-level capitalism in central Los Angeles, and one of the most vital food streets in the world.

Indeed. It was partly Gold's gradual eating trek down Pico in his 20s that inspired me to pick Pico for this year's walk.

So, of course, I had to contact the Pulitzer Prize-winning scrbe. To my pleasant surprise, he emailed back quickly, and even said he read Franklin Avenue! I managed to pick his brain on a few spots we should all consider trying once everyone's bellies start growling. A selection:

That's it for now-- "Man, it's a long street. I'll try and think of some others," he writes. Thanks to Jonathan Gold for sharing his insight on eating down Pico!
Posted by Mike at 1:18 AM

Besides this referenced article, Jonathan Gold's story was also told by Ira Glass on "This American Life" and, coincidentally enough, it was broadcast on the iTunes podcast just a couple weeks ago.

The topic was segment #5 in a show entitled "#110 Mapping". iTunes only hosts the most recent episode, but this one can be found archived on their official website.