Mid City Gets Into the Great Los Angeles Walk 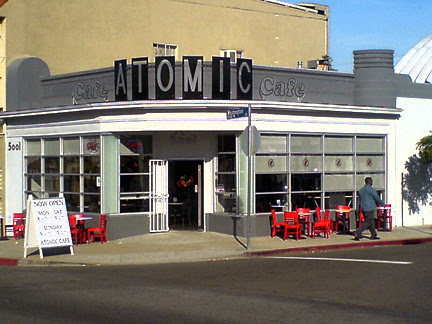 The Mid City Neighborhood Council is going to sponsor a "Water & Supply Station" for the Great LA Walk. We will be setting up a table outside the Atomic Cafe, located at 5001 W. Washington Blvd. (on Washington, a block west of La Brea).

We will have free bottled water, snacks, sunscreen/band-aids, and also a limited number of token items to show our appreciation for this year's walk participants.

The Water & Supply Station will be set up between 10:30 and 2:30 - that should be enough time for participants to get to and out of Mid City. Also, Tony Shibatta, owner/proprietor of the Atomic Cafe, will also be offering a lunch special to GLAW participants.

Our particular stretch of Washington (between Crenshaw & Fairfax) has seen some positive changes in the last 5-10 years. The Nate Holden Performing Arts Center is finally beginning to regularly book mid-size theater, music and dance events, and business facade & sign improvements as well as landscaped medians were completed on the strip as part of a CRA grant.

New Korean & Salvadoran restaurants have been doing brisk business and although the economy has put a strain on financing, we think that the Midtown Crossing Shopping Center located at the junction of Venice/San Vicente/Pico) will eventually finish Phase II.

Atomic Cafe opened about two years ago and it was a total "game-changer" in that it finally brought out all the people in the neighborhood who were previously not interested in eating within their neighborhood. It has become an ad-hoc community gathering spot. We still have a lot of work to do, but we are making concerted efforts to attract some of the galleries/studios and other small businessess which may be getting priced out of the Culver City Arts District. We hope you enjoy our neighborhood!

For more on NHPAC (it replaced the old Ebony Showcase Theater): Click here.

Thanks to Bruce and the Mid City Neighborhood Council! More details to come over the weekend!
Posted by Mike at 3:20 PM