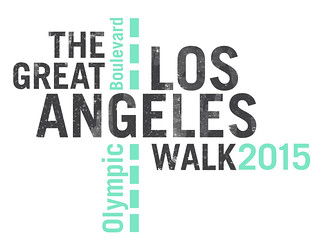 The Great Los Angeles Walk is coming close! Sent to the media this morning:

LOS ANGELES (Nov. 9, 2015) -- Hundreds of Angelenos will hit the sidewalks on Saturday, November 21 for The Great Los Angeles Walk 2015 – the annual event that dispels the myth that “nobody walks in L.A.”

This year, for the tenth edition, the Great Los Angeles Walk (http://www.greatlawalk.com) is finally tackling one of the city's iconic boulevards: Olympic!

Olympic was chosen for a variety reasons: Not only is it one of the few major Los Angeles streets that the Great Los Angeles Walk hasn't yet hiked, but for our 10th anniversary, it makes sense to celebrate on the boulevard once known as 10th Street. Olympic Boulevard was renamed in honor of the 1932 Olympics – and now, as Los Angeles harbors dreams to once again host the Games in 2024, the Walk will also recognize that bid.

After touring Clifton's remarkable rehabilitation, walkers will proceed to walk approximately 16 miles (at a casual, all-day pace) to the ocean.

The Great Los Angeles Walk will conclude with an after party in Santa Monica at a location to be announced later. Walkers will be encouraged to utilize Metro public transportation at the start or finish of the walk.

In 2007, for an encore, he chose another downtown-to-the-ocean route: Pico Boulevard. The 2008 Walk took on Santa Monica Blvd. In 2009, the event kicked off in the historic West Adams district and walked to Venice Beach via Adams and Washington. In 2010, for its fifth edition, the Great Los Angeles Walk reprised its original Wilshire journey. In 2011, participants marched to the ocean via Hollywood Boulevard. In 2012, the Walk traveled across Melrose Avenue; in 2013, Sunset Boulevard; and in 2014, the Walk traveled across the San Fernando Valley via Ventura Boulevard.

The Great Los Angeles Walk grew from dozens of participants to hundreds, and continues to expand each year as more Angelenos join in to explore their city on foot. Thanks to the Los Angeles Times and Clifton's Cafeteria for their support.

The official hashtag of The Great Los Angeles Walk is #glaw. Folks at home are welcome to follow along all day on the walk's official Twitter feed, @greatlawalk, as we continually post our location.