Joan's On Third Santa Monica is Our Post-Walk Venue! 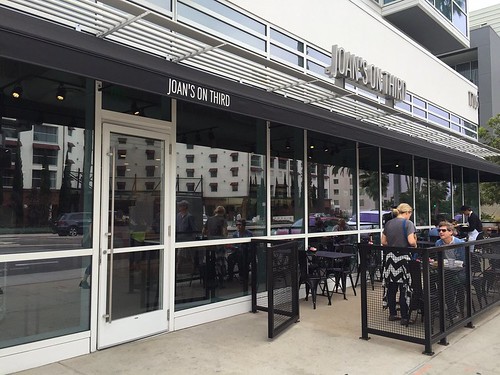 Big news! We've found a spot to celebrate the end of the GREAT LOS ANGELES WALK! Join us after hoofing 16 miles at the Joans On Third Santa Monica, where we'll eat some food and throw back some beverages while recapping the day. (I wish I had the money to pay for all of us, but alas, you're on your own with covering your food/drink.)

Join us after we take a group photo at the ocean!

Joan's On Third closes at 8 p.m.; after that, we may move over to Chez Jay:

Chez Jay on Ocean Avenue in Santa Monica, California has been serving locals, celebrities and visitors since 1959. We have been known as a celebrity hang out, “dive bar” or “classy joint” since we opened. Chez Jay is one of the premiere steak and seafood neighborhood restaurants in all of Southern California. Offering it’s unique and friendly atmosphere to everyone including those famous faces that still call Chez Jay their favorite place.

Chez Jay became the social crossroads of an incredible cultural revolution that has impacted movies, television, music, art, politics and more. In recognition of its importance Chez Jay was declared a Santa Monica Landmark in 2012.

Chez Jay is just ½ block south of the Santa Monica Pier on the east side of Ocean Avenue right next to the incredible Tongva Park.