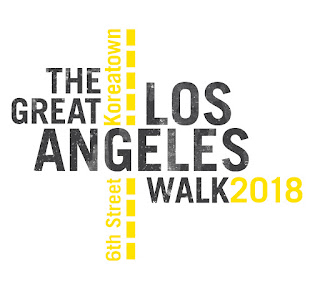 THE 13th ANNUAL GREAT LOS ANGELES WALK HITS 6TH STREET AND KOREATOWN, IN TRIBUTE TO JONATHAN GOLD, FROM DOWNTOWN TO THE OCEAN ON NOV. 17

LOS ANGELES (Nov. 1, 2018) -- Hundreds of Angelenos will hit the sidewalks on Saturday, November 17, for The Great Los Angeles Walk 2018 – the annual event that dispels the myth that “nobody walks in L.A.”

This year, for the 13th edition, The Great Los Angeles Walk (http://www.greatlawalk.com) is paying tribute to the late Jonathan Gold by hiking down 6th Street. It's one of the key arteries through Los Angeles' Koreatown neighborhood, and according to Gold's assessment of Koreatown's restaurants, it also boasts some of the neighborhood's best food.
Participants will meet at Pershing Square, in downtown Los Angeles, at 9 a.m. on Saturday, Nov. 17.

From downtown, we'll start off at Pershing Square, and head west -- along the way seeing sites such as the Standard Hotel, the Jonathan Club, the Pacific Dining Car restaurant, MacArthur Park, the Park Plaza (now known as the MacArthur), Lafayette Park, Chapman Market, Koreatown, Hancock Park, Park La Brea, the La Brea Tar Pits, LACMA, and more. When 6th ends, we'll stroll up San Vicente to Burton Way, and walk through a strip of Beverly Hills, past the Courthouse and city center, and down Little Santa Monica, eventually making our way onto Santa Monica Blvd. for the rest of the walk to the ocean.

The Great Los Angeles Walk will conclude with a group photo and informal celebration in Santa Monica at a location to be announced later. Walkers will be encouraged to utilize Metro buses and its Expo Line, which offers public transportation at the finish of the walk back to downtown.

Like many Angelenos, we were heartbroken to learn of Jonathan Gold's death earlier this summer. If you loved Los Angeles, you loved J-Gold — one of the most important L.A. boosters ever. When the Great Los Angeles Walk first tackled Pico Boulevard in 2007, he gave us a list of restaurants to visit during our all-day hike — something we used again when we returned to Pico in 2016.